My most recent Graduation English Board with the same characters from previous years. This involves every non-graduating student writing one word that describes the graduating students on a balloon. I set a few rules (i.e. it can’t be a mean word). I think it turned out really well. The picture quality is not great mainly to protect the students privacy (the kids all signed their balloons). 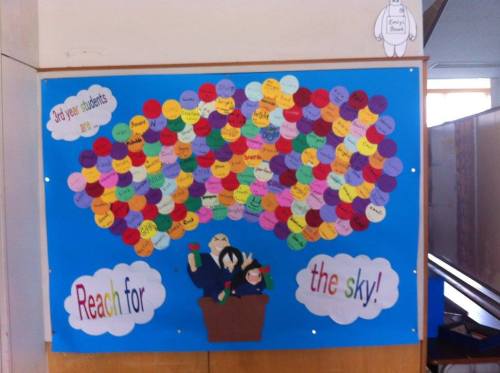 Here is a super simple New Year Board. I’m all about reusing the butterflies!

Here are some minimal English boards for Entrance Ceremony and Graduation Ceremony. As you can tell I reused the basic idea and characters but I changed the  uniform to match the school ( these are two different schools).

My November English Board: Guy Fawkes / Bonfire Night themed. I’m a bit late with uploading these pictures considering I’ll soon be changing it for a Christmas board but better late than never! 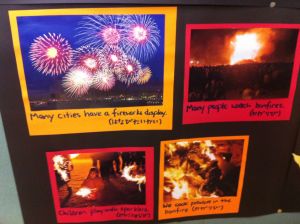 Closer on left side 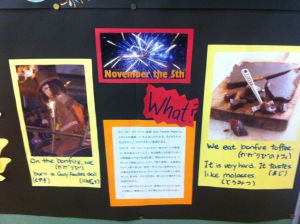 Closer on right side 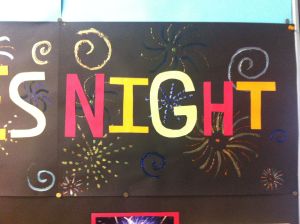 I might have gone a little bit crazy with glitter glue….maybe…

Latest English Board for Halloween

Bad quality picture but I forgot my camera so I only had my phone at school. I’ve seen lots of students looking at this board so I am really happy with it!

New school, new English Board. This time I’m the only ALT so I’m having to do them all by myself. The postition of the board isn’t quite as good as my last school either. At the last school it was huge, right by the entrance and next to the club notice board so every student who needed to check if they had club activities (almost everyone) couldn’t avoid seeing it. This time it’s opposite the staffroom but a little bit away from the entrance the kids use. However it does mean the staff can’t avoid seeing it so I’ve been getting lots of comments from them so far!

I’ve got it split into sections:

–  Light blue is the banner. I’m using the school’s nickname rather than its actual name here, it means ‘bamboo wind’ apparently since there is lots of bamboo near the school and it’s on the top of a mountain so I guess it’s pretty windy! Actually making this board has been really difficult due to the fact that I’ve had to lay out lots of little bits of paper but they kept being blown away by the fans and wind coming through the open windows (35C and no air-con!) . Eventually I just blu-tacked everything in place until I had it all sorted and then glued it down. Some of the other teachers joined me today near the windows (there are some big desks there) as they were marking tests but unfortunately all their papers went flying!

– Dark blue is my self-introduction. I didn’t want to put too much information there since I’m having to do 50minutes worth of self-intro in each class but my lovely sister suggested I compare Sendai and my home island (I can’t say ‘hometown’) of Shetland. I think it turned out pretty well. I was also a little free with the truth when it came to my hobbies because I didn’t have too many pictures of me doing things.

-Yellow is my ‘Did you know?’ section. I’m planning to put a different fact every month. This month it was about which countries have English as an official language.

– Orange is my Genki section. Genki is a magazine made by some of the other assistants here in Sendai so since I had some extra space I thought it would be a good place to show it. 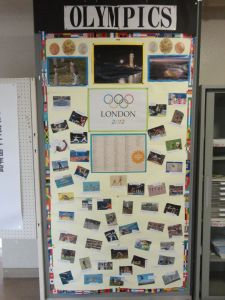 It’s only been up for a few hours and already it’s our most commented on English Board yet!

The pictures are of every sport in the Olympics. They are captioned in English and Japanese. The students (and teachers!) found some of the sports included surprising (BMX!) and were amazed that baseball was missing.

Ready for an adventure?
Create a free website or blog at WordPress.com.